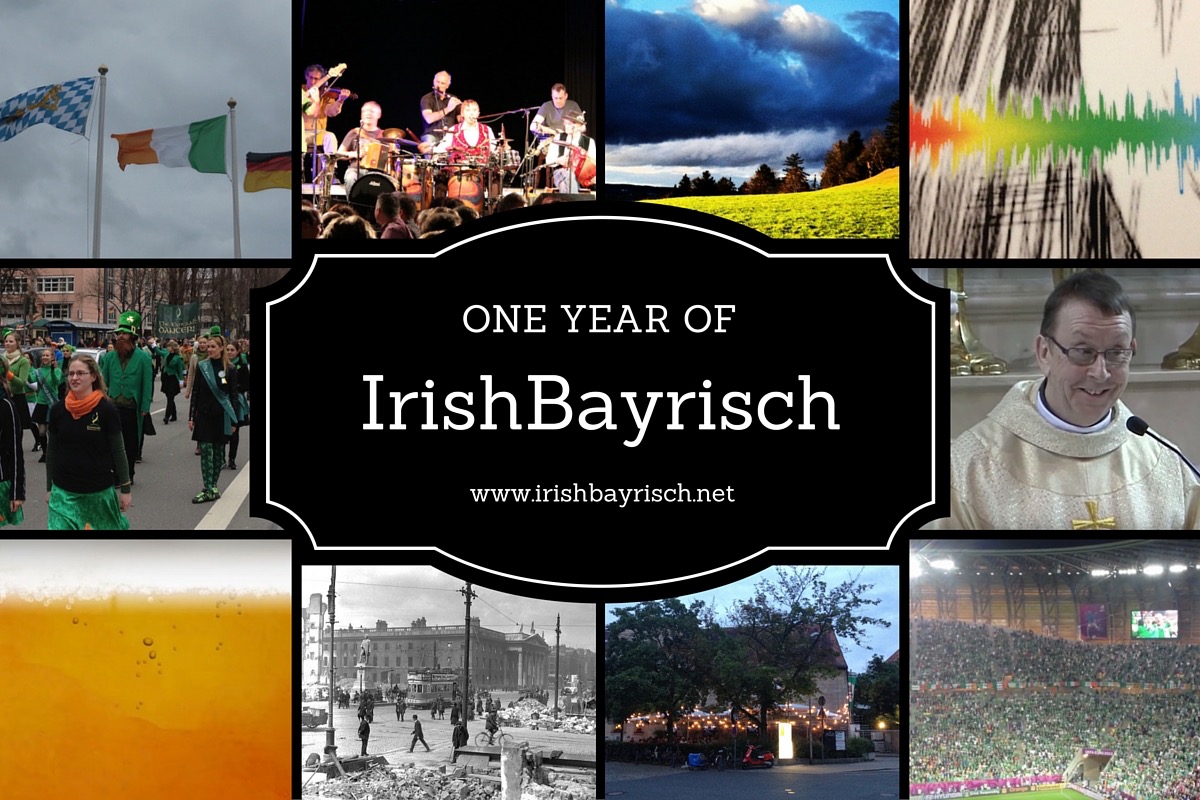 One year ago, I started blogging here on IrishBayrisch. A lot of things have happened since then. Surprises included. Time for a little reflection.

10 posts have been published within one year. I’m very happy about that knowing and experiencing that writing takes its time and can be a real challenge sometimes.

It all started of course with a welcome. It explains why this blog exists. A few months later I experienced how Irish-Bayrisch sounds when the Bavarian music comedians Da Huawa, da Meier und I and the traditional Irish band Na Ciotogi presented their CD with the same name at the Schlachthof in Munich. With Christmas approaching, I was reminded of the green Christmas I experienced in 2012 with my parents in Peiting. A great opportunity to select and publish a few photos that I took during our walks. Echolocation from Terry McDonagh was my first book review if you like. A book that I spotted during my Christmas holiday in Ireland. Back in Munich, I had to attend the 21st St. Patrick’s Day Parade. It was a fun experience meeting a lot of dear friends. In order to celebrate the 2 year anniversary of a very special Hallelujah, I wrote a post about the famous YouTube video of Father Ray Kelly and what happened after that. The next two posts mark the celebrations of two very different and important events in Bavaria and Ireland that were very different in nature and have a strong and lasting influence on the culture and identity of the people: 500 years of purity law for beer in Germany and The Easter Rising of 1916 in Ireland. While traveling with work to Franconia, the lovely northern Bavarian region, I spent an evening at the Kitzmann BräuSchänke in Erlangen that I found worth writing about. And then of course there was the UEFA EURO 2016 in France that reminded me of a very dear song, The Fields of Athenry.

My personal highlights during the first year of blogging were getting in touch with people. I was very happy to receive a reply from Father Ray Kelly who must be a very busy man. His famous Hallelujah video reached 50 million views on YouTube this week. It was great to communicate with David McMahon from Na Ciotogi and Terry McDonagh who both left comments on IrishBayrisch. And the fact that two people from Bavaria who moved to Dublin found this blog while looking for some Bavarian activities there came as a very nice surprise.

An infrastructure to reach more people has been set up as well. IrishBayrisch has has a Facebook page, a Twitter account and uses the hashtag #IrishBayrisch. Google Analytics is set up to see how many people this blog reaches. In the first year it tracked 2,346 sessions, 1,912 users and 3,262 page views.

For the second year I want that more posts are published more regularly. I also want to win other people who want to write something here. So if you have something to share please let me know.