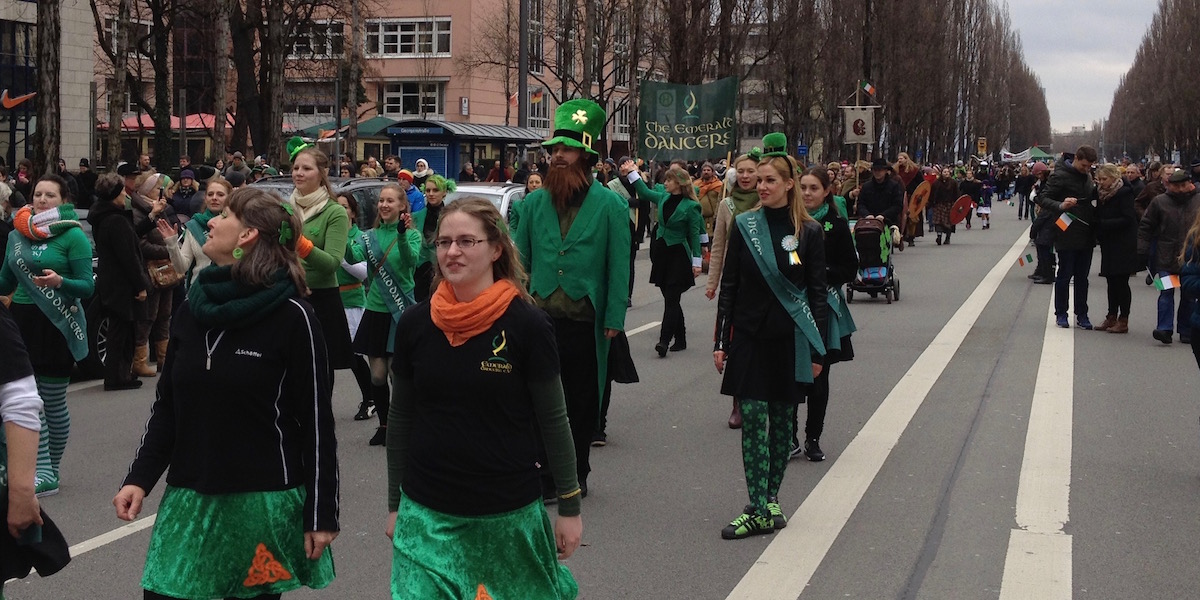 We see a lot of green in the underground. Much more than usual. As we climb up the stairs at Münchner Freiheit we can hear drums. A few minutes later it starts: The 21st St. Patrick’s Day Parade in Munich.

The head of the procession is marked by the four flags of Germany, Ireland, Bavaria and Europe. Two bands follow: The Afro-Brazilian drum group VemComigo from Übersee at Chiemsee and the Scottish pipe band Claymore Pipes and Drums from Munich. On St. Patrick’s Day, everybody is Irish.

Even a Stormtrooper from Star Wars can’t escape the Irish celebration. He has coloured his armour in green for this special day.

The St. Patrick’s Day Parade took place in Munich for the first time in 1996. A few Irish people and their friends organised the event and planned for 200 visitors. 3,000 came. It was clear then, that it would make sense to repeat this event.

Now, 21 years later, more than 20,000 Irish people and Ireland enthusiasts get together in Munich to celebrate the patron saint of Ireland, St. Patrick. They make the parade the biggest St. Patrick’s Day Parade on the European continent. It typically takes place on the Sunday before the actual St. Patrick’s Day, the 17th of March.

About 50 groups and more than 1,000 people participate in the parade. There are both Irish bands, dance groups, culture and sport associations as well as Bavarian marching bands and international bands. It is no surprise that the motto of the parade is “Irish-Bayrisch”. The procession starts at Münchner Freiheit, marches down Leopoldstraße and Ludwigstraße and ends at Odeonsplatz.

Patron of the event is Munich’s Lord Mayor Dieter Reiter. He is accompanied by Michael Collins, the Irish Ambassador in Germany, Jennifer D. Gavito, the U.S. Consul General in Munich, and Erich Lejeune, Honorary Consulate General of Ireland.

The 21st St. Patrick’s Day Parade in Munich is a wonderful experience. Walking right next to the parade with friends from Ireland, Bavaria and Scotland, having a chat and look around. Time flies and sooner than we think we arrive at Odeonsplatz. Here, the parade ends and the celebration continues.